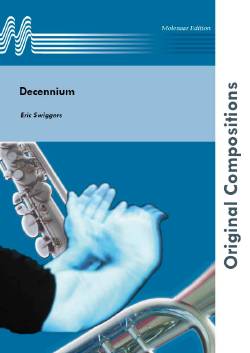 'Decennium' was composed in 2003 as a commission by the municipality of Berheze for its tenth anniversary. The composition describes the history of this town in the Province of Brabant, consisting of 6 different villages: Heesch, Heeswijk, Dinther, Nistelrode, Loosbroek and Vorstenbosch. The composition starts with a slow introduction, Adagio Misterioso, suggesting the atmosphere in long-ago days when the area consisted mainly of swamps, meres and low woods. (The word 'Bern' is a synonym of 'Born' meaning source or water, whereas 'Hese' is derived from 'Haisjo' meaning brushwood ). Above the dark sounds we hear far away trumpet signals announcing the Middle Ages. After a piercing crescendo, we hear the full sound of festive trumpets. A medieval dance, as was to be heard in the Heeswijk castle, follows. This dance gets a more and more stirring character and finally turns into a merry popular dance ending with a burst of laughter reproduced by descending scales with the muted trombones and trumpets. A slow transition with a quotation from a Gregorian plainsong (Domine Deus) and church bell ringing, referring to the Abbey of Berne, brings us to a romantic Larghetto. This part describes the quiet rural life in a beautiful natural surrounding. The last dying note contrasts with the threatening ostinato, referring to the rise of the industrialization, which provoked quite some resistance with the local people. Once more we hear the 'Domine Deus' but much more powerful this time. When the resistance calms down, the work concludes with an Alla Marcia. The first notes of the main theme could be heard all through the composition and now we hear the complete main theme again. The new town is born. A festive conclusion refers both to the tenth anniversary and the optimism and confidence as to the future.