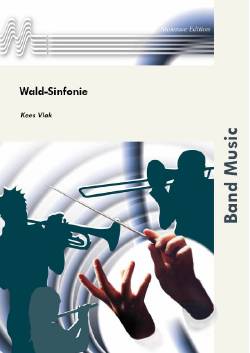 It was during his stay at Freiburg, Germany, where he was attending a Music Festival, that Kees Vlak found his inspiration for this romantic work. At this festival he was awarded a prize for one of his compostitions, which was played by several bands from different countries. The composer was staying in the small village of Horben, hidden among pine woods on a mountain at the border of the Black Forest. From the balcony of his room he had a splendid view on the Schawinsland Valley, scarcely hidden by the tops of the huge pines. Each morning a blackbird singin in a huge pine next to his window woke him up. This bird song opens the composition. Whenever possible the composer and his wife went for a walk in the Black Rorest. The rediscovery of this wonderful area is expressed by the steadily increasing number of tone colours, used in the orchestration. Each village still boasts its own folk music and dances. More than one hundred bands were playing all around; the Black Forest seemed to be the scene of one huge festival. The image of the Black Forest is also linked to that of hunting scenes, so the next theme is being introduced by hunting horn themes. The second theme paints the lake “Titisee”. At first the lake is very calm, but a stiff breeze sets both water and music alike in motion. The small town of Titisee is very popular with tourists and is famous for its woodcutting, its clockworks and musical boxes. It is a popular folk tune, played by a musical box that makes the link with the next theme. The joy and cheerfulness of the dancing village people is expressed by a movement which works out the initial theme. On leaving the little town, one can hear once more the hunting music from the wood as well as the song of the birds. The new theme is againg closely linke d to the hunt and played by the typical German helicon-like euphoniums.this theme interacts with the wecond theme and the word ends with a grnd finale meant as a musical hommage tot this wonderful area.