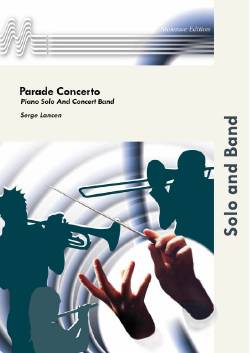 PARADE CONCERTO was Lancen's first concerto for symphonic band. He had fallen in love with the marvellous sonorities of a symphonic band and wanted to join the wind players in a concert, so he wrote this concerto and gave it a parade character. PARADE CONCERTO was premiered in 1972 by Pierre NIMAX in Esch-sur-Alzette (Luxemburg), G. WAGNER conducting. That same year the composer performed it for the first time, in Spain with the Banda Primitiva from Lliria, Jan MOLENAAR conducting. He has performed it since in many countries, including France, Belgium, Holland, Germany, Luxemburg, Norway and the USA.