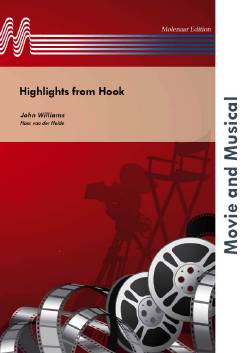 Highlights from Hook ( 0ut of print)

In this selection 'Highlights from Hook' you can hear the very best musical moments from the soundtrack of the Steven Spielberg movie picture 'Hook'. The composer John Williams needs no introduction and, once more, he composed thrilling music to the film scenes, which remains as exciting without the film pictures. The selection starts with 'Prologue', the opening music of the movie. At 'D', 'Presenting Hook', Captain Hook is introduced as a whimsical and unpredictable character walking across the deck, shouting and stamping. The third (more quiet) part is 'When you are alone', sung by Peter Pan's daughter in the film after she has been kidnapped by Captain Hook. Be careful when performing this part, as the expression 'piu mosso' at 'H' does not indicate precisely what the composer wants. Everybody should start at 'H' in a whispering way and then continue in a widespread crescendo/accelerando up to measure 208. At 'I' (Grandioso) the horns and trumpets have an important role. The tempo and changes in tempi depend on the conductor's views. The final part four, 'The Feast', brings the selection joyfully to an end. We hope both musicians and public will enjoy this selection.