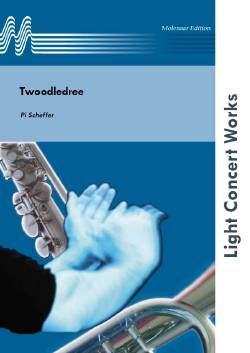 PI SCHEFFER (Amsterdam 1909 - Naarden 1988) became popular as musical leader of several famous Dutch radio orchestras such as 'The Skymasters', the 'O.K.Wobblers' and 'De Zaaiers'. This doctor in English Linguistics wrote a series of very fine compositions for wind band. Twoodledree (1984) was one of the lighter swing pieces which was followed by 'Twoodledrum', both titles referring to the funny twin characters of Lewis Caroll's 'Alice in Wonderland'.