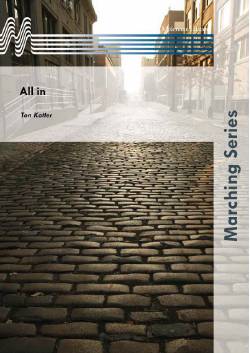 The Dutch composer and conductor Ton Kotter (Aalten 1906 -1991) was trumpeter-violinist with the Royal Marine Band before being appointed conductor of the Nijmegen Police Band. He conducted a lot of amateur wind bands (a.o. in Helmond, Nijmegen, Tilburg, Hilvarenbeek, Glanerbrug, Enschede and Loon op Zand) and for these bands he wrote several fine marches. Among his best-known marches are 'Hunter March' (1976) and 'Ambiorix' (1976). 'All-In', probably his last march, was composed in 1981 for the 70th anniversary of the symphonic band 'Excelsior' at Eibergen, conducted by the composer.