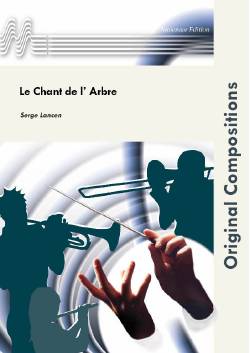 Serge Lancen was born in Paris in 1922. The whole of his life has been dominated by music. He wrote his first work at the age of four. He studied with Tony Aubin at the Paris Conservatoire. In 1949 he won a prize for his Etudes, and some time later he was awarded the Prix de Rome. His work as composer is very varied and includes a number of solo concerti (for example for flute, double bass and piano), a Sinfonietta and a large number of works in the light symphonic genre (many of these commissioned by the French Radio), chamber music, film music, and during the last ten years various works for wind band, such as the Manhattan Symphony, Festival in Kerkrade, Symphonie de Paris and this beautiful Chant de l’Arbre (Song of the Tree).