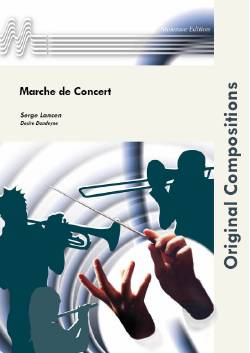 This concert march was originally written for the piano in 1960. In the meantime, his friend Désiré Dondeyne whom Serge Lancen had met as fellow-pupil at the Paris Conservatoire National Supérieur de Musique had drawn Serge's attention to the symphonic band. Dondeyne had been appointed conductort of the Paris Metropolitan Police Band in 1954. The Marche de Concert was orchestrated by Désiré Dondeyne in March 1961 and it was the very first time that both great musicians collaborated. The march was premiered by the Musique des Gardiens de la Paix on the bandstand of the famous and beautiful Paris public garden ‘Jardin du Luxembourg' on 8 July 1961.