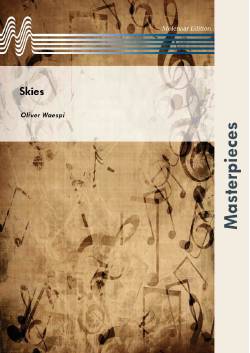 Program notes by Oliver Waespi on his composition Skies: Skies is the plural of Sky. We may wonder are there several skies? Is the sky we all long for not the same for everybody? While travelling on foot and "in the open air" I have observed the firmament often in quite different shapes, so that I can say I have indeed experienced the sky in different ways. Years ago I already wanted to portray "my sky" in music; I finally have been able to realise this long-cherished dream. This composition deals with the sky, more precisely with my sensual and emotional experience of the sky in all its aspects. Two point of views are combined in this composition: one showing the sky as it presents itself to me, the other showing the sky as I observe it. The music was bom simultaneously by intemal and extemal inspiration: it describes nature but also the emotional and spiritual experience of nature. To me, the experience of nature is not abstract, but it is connected with concrete ages, places or people from my neighbourhood. This is why I have combined several parts of this composition with certain landscapes. The sky presents itself in different landscapes in the most varied ways: for the sensual experience, there is no sky as such. The indications of places spread all over the score, are primarily clues for myself; they represent certain atmospheres, which I have experienced especially in England and Scotland. They can however also be useful to the musicians and the audience, providing they know those landscapes and the celestial atmospheres linked to them. The music is independent from the atmospheres described in the subtitles, as those are rather connected to a tragic nature, and so the music is not based on any program. Musically spoken, the composition has a symphonic structure, which means that the complete musical material is derived from three contrasting main themes. In the first part, the description of a noctumal sky ("Night") two themes are developed in an organic way; the first, rather "dusky", is to be found with the horns, the second, "in bright daylight", with the oboe and flute, the third, "more quiet" , with the brass instruments. In the next part, we have clouds and rain over the Isle of Skye (one of the Hebrides islands in Scotland) and here several elements of the first theme are still more developed. Then we get an increasingly dark mood, which is released, in heavy chords. Then suddenly, the sun breaks through and the music gets a majestic character. We have a new shape of the initial theme, first with the French horns and then with the trombones. The music gets a quicker tempo and flows into a quick movement describing the winds and waves at sea ("Wind and Waves"). Three themes are gathering and some variations are developed. The music gets more and more energetic and, after a climax, calms down again. Then we have a kind of "summer pastoral" which suggests summer at the South coast of Cornwall ("South Coast of Penwith Peninsuia in Summer"). This is certainly not the hotte st summer in Europe, but still it is beautiful in this country that is blessed with so much rain. In the "pastoral" , the sea is already sketched in broad outlines in the French horn solo. The magnificence of an aftemoon at the seaside is developed at the end of the composition ("Noon at Treen Cliff', a rock protruding in the sea next to Porthcumo at the South Coast of Cornwall); here the music gets stronger and stronger and after a majestic climax it vanishes completely.